All the real-time operating system kernel and open source components can be used free of charge for commercial products, there is no potential commercial risk and you will not being request to publish application source.

In normal conditions, please name directories in lower-case. Directories should have descriptive names.For example, the port of a chip should be composed of the name of the chip and the category of the chip. Directories under components/ should stand for what the component does.

In normal conditions, please name files in lower-case. If the file is referencing other places, it can have the original name. To avoid naming collision, do not use general names or the names that are frequently used.

To avoid include the same header file for multiple times, you need to define a symbol like this:

The symbol should begin and end with "__" to avoid naming collision. The words of the file name should be connected by "_".

Please name structures in lower-case and connect words with "_". For example:

Braces should have their own lines and the members should be defines with indent.

The names of type defines such like structure types should be the structure name plus "_t". For example:

In order to be easily referenced, the types of objects in kernel is pointer. For example:

In RT-Thread, please use upper-case names for macro definitions. Words are connected by "_". Like:

Please use English to comment. There shouldn't be too much comments and the comments should describe what does the code do. And it should describe how the complicated algorithm works. Comments to statements should be placed before them or right of them. Anther places are illegal.

Please use TAB or 4 spaces to indent. It's preferred to use 4 spaces. If no other special meanings, the indent should begin right after "{":

The only one exception is switch. In switch-case statements, "case" should be aligned with "switch":

"case" is aligned with "switch", the following code block should be indented.

For ease of reading, it is advised that braces should occupy the whole line instead of following other statements. Like:

When matching braces have their own lines, the reader would identify the code blocks easily.

There should be a space before parentheses when it's not a function call. For example:

In expressions, there should be a space between most binary and ternary operators and the strings. No spaces around(inside) parentheses, like:

This is a bad practice.

In RT-Thread, rt_kprintf is a commonly used logging routine. In RT-Thread rt_kprintf is implemented as a polling, non-interrupting string output. It is suitable in "instant" situations such as interrupt context. The polling method would have influence to the timing sequence of the log output.

It is not recommended to use rt_kprintf frequently. Unless you are aware of that it's not a big deal to run slower.

Logging should be off by default and can be turned on by a switch(e.g. a variable or a macro). When logging, it should be easy to understand and easy to determine where the problem is.

Functions in kernel should be K.I.S.S. If the function is too long, you should split it into smaller ones and make each of them simplified and easy to understand.

The kernel of RT-Thread uses object-oriented tech in C. The naming convention is: structure names are the object names, object names + verb phrases are the method names of objects:

rt_timer + verb phrase stands for the method that could be used on timer object.

When creating a new object, think twice on memory allocations: whether a static object could be created or it could only created dynamically on heap.

14. Use astyle to format the code automatically

Install Git: You need to add Git's directory to the system environment variable.

Now take RT-Thread repository as an example to illustrate the process of contributing code:

Fork the RT-Thread/rt-thread repository into your git repository.

In your repository, copy the repository links after your fork: 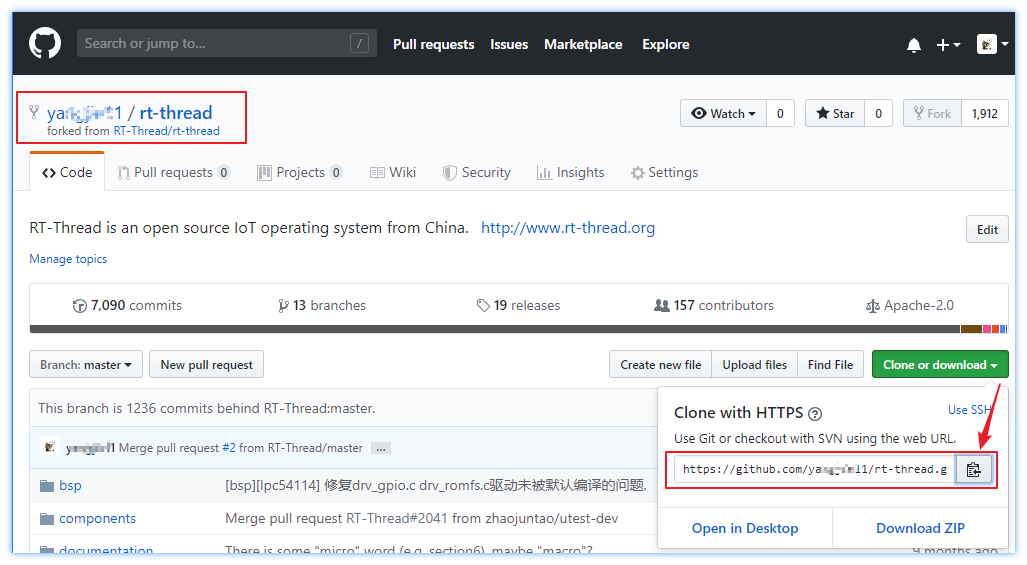 You can use the git clone command to copy the repository to your PC:

It is recommended that you create your own development branch based on the master branch, and use following commands to create a new branch: Add all changes to the temporary area:

If you only want to add some specified files to the temporary area, use other commands of git add.

Submit this modification to the local repository:

Note: If there are multiple commits in the local development branch, in order to ensure that the RT-Thread repository commit is clean, please tidy up the local commits. More than five commits are not accepted by Pull Request.。

Push to Your Remote Repository

Enter the RT-Thread repository under your Github account and click New pull request -> Create pull request. Make sure you choose the right branch.

Step 1: Fill in the title of this Pull Request

Step 2: Modify the description information of this Pull Request (modify it in Write and preview it with Preview): Make sure that CLA shows successful signing and CI compilation, as shown in the following figure:

Note: Do not submit commmit using a non-GitHub account, or commit using a different account, which can lead to CLA signing failure.

Once the request is successful, the RT-Thread maintainer can see the code you submitted. The code will be reviewed and comments will be filled in on GitHub. Please check the PR status in time and update the code according to the comments.

So far, we have completed a code contribution process.

Keep in Sync with RT-Thread Repository

The content of the RT-Thread GitHub repository is always updated. To develop based on the latest RT-Thread code, you need to update the local repository.